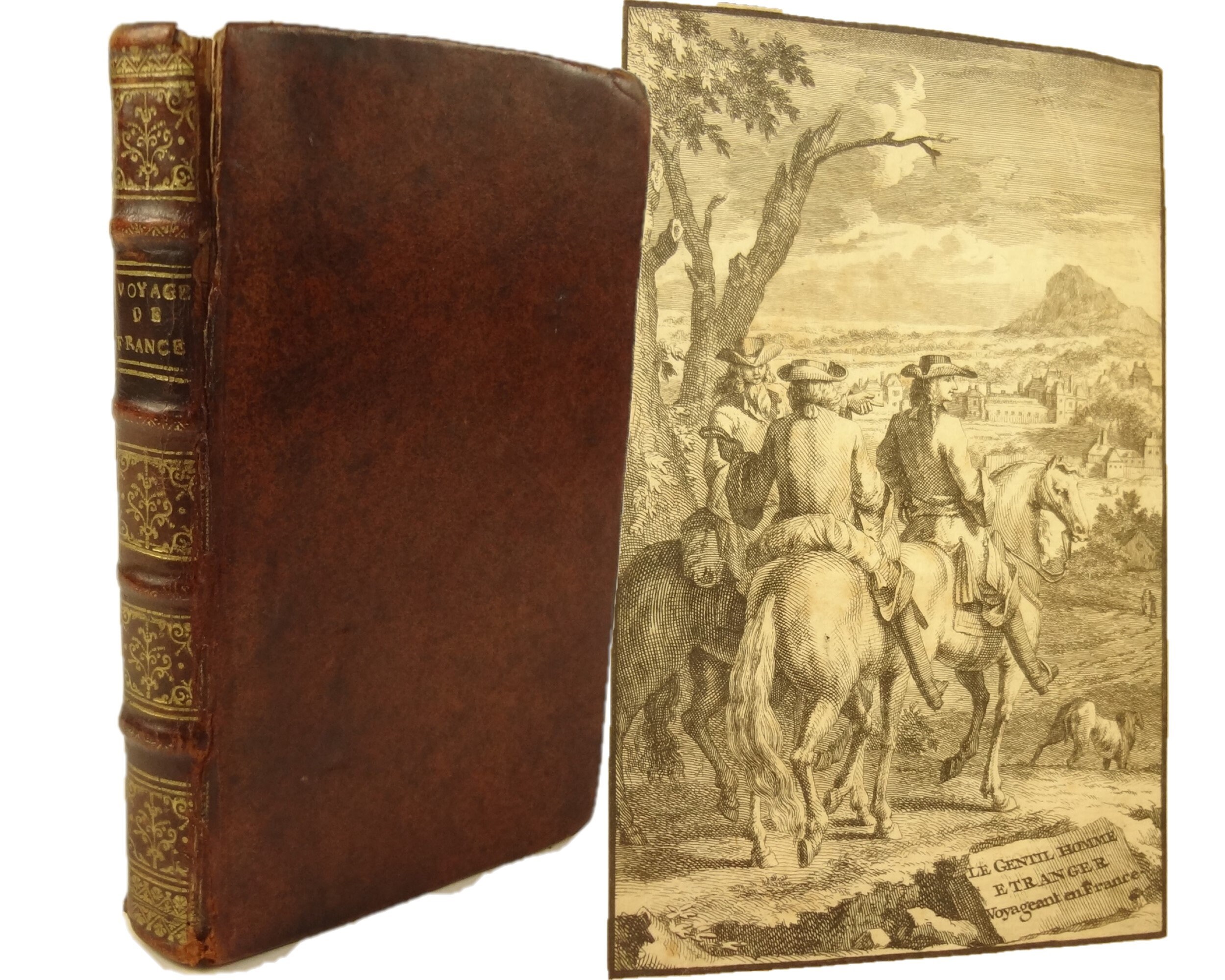 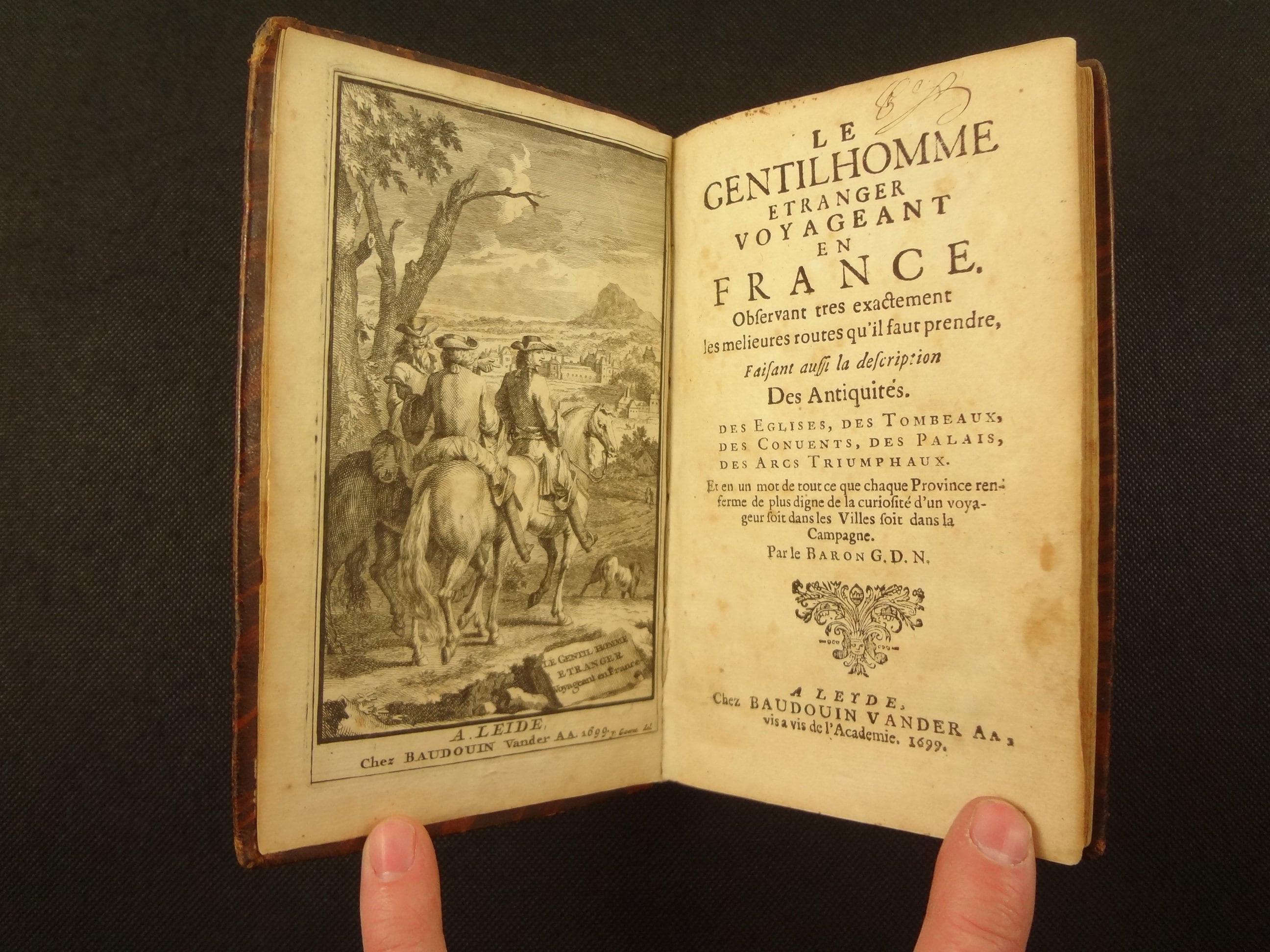 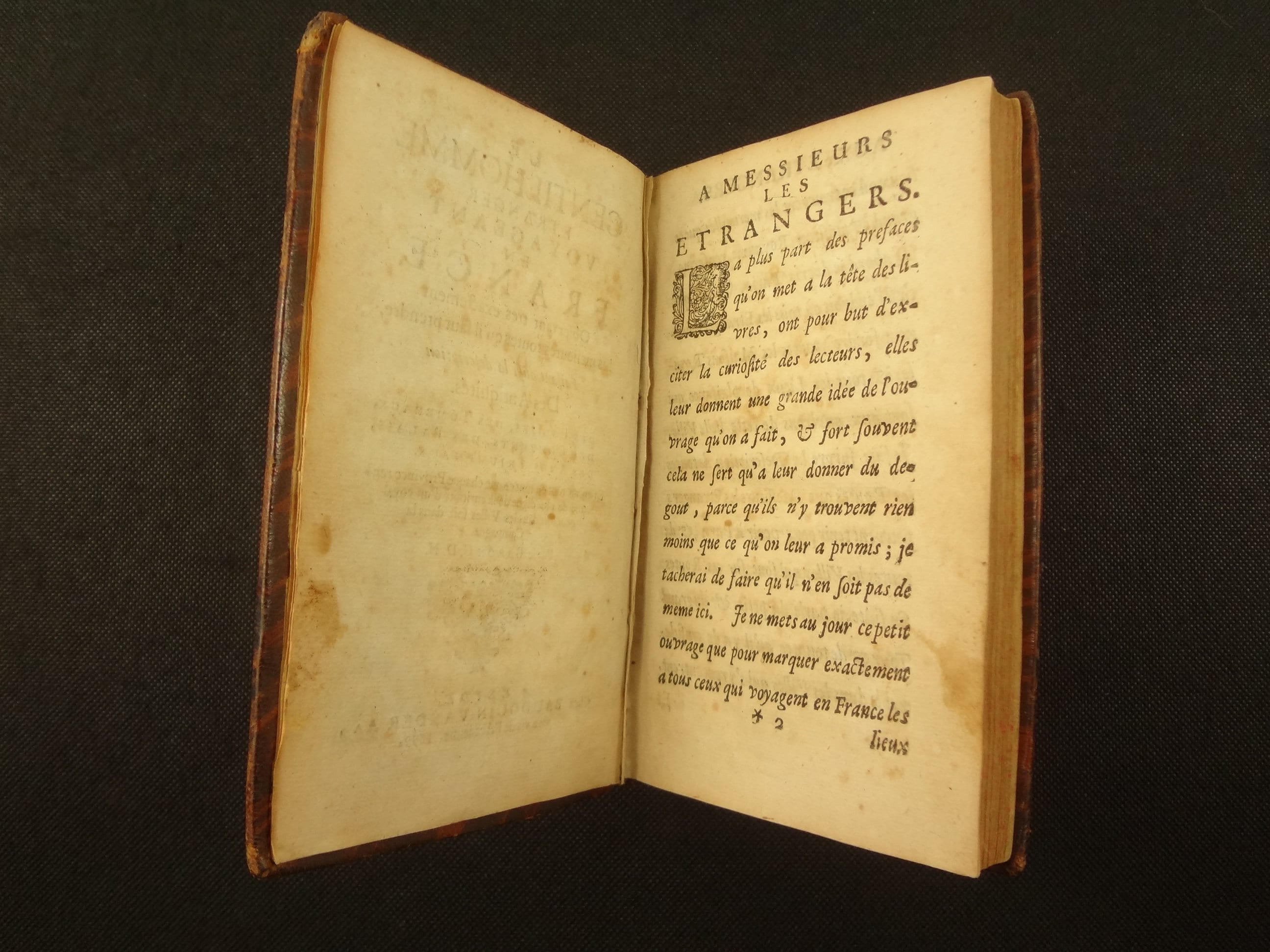 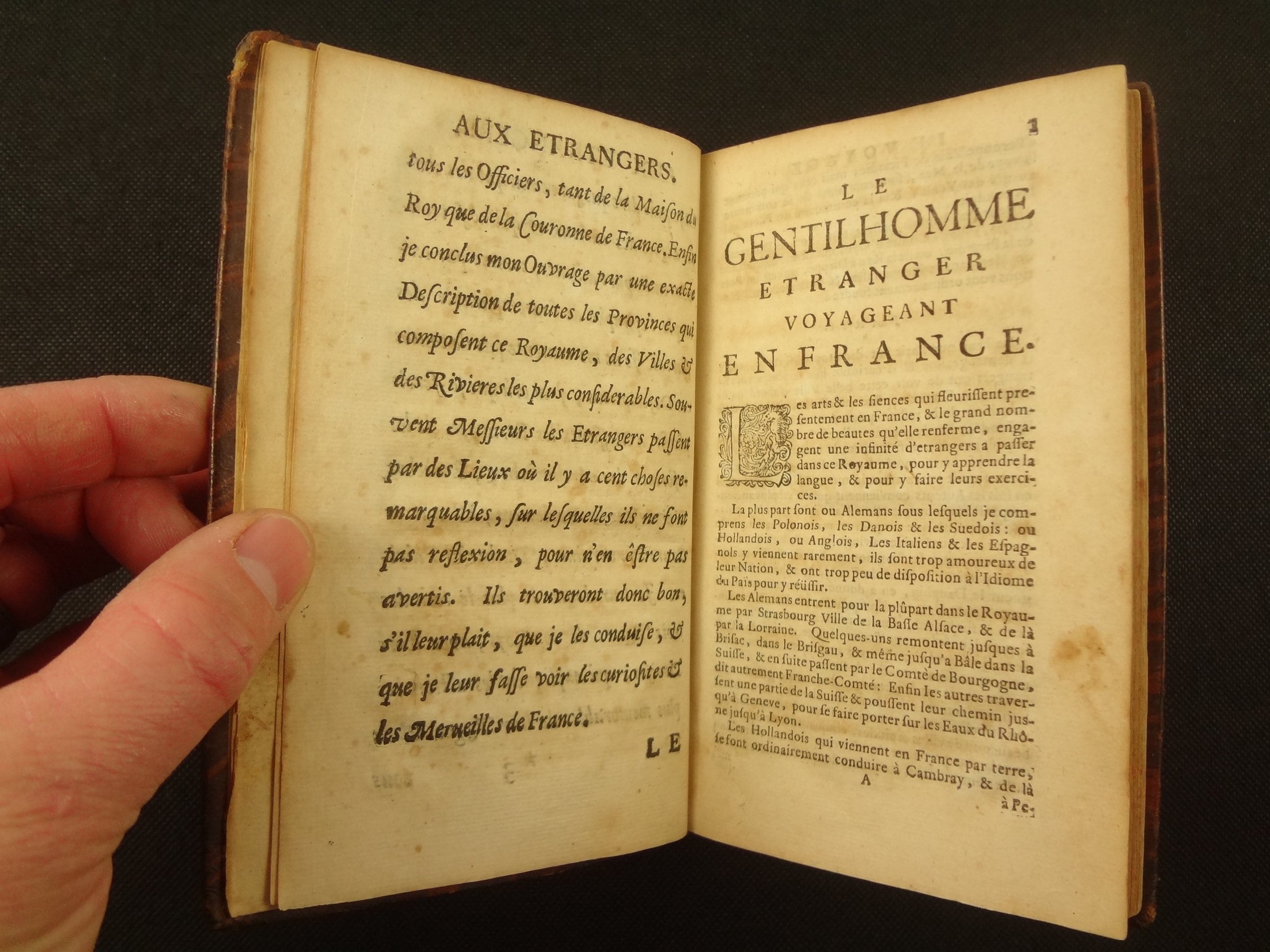 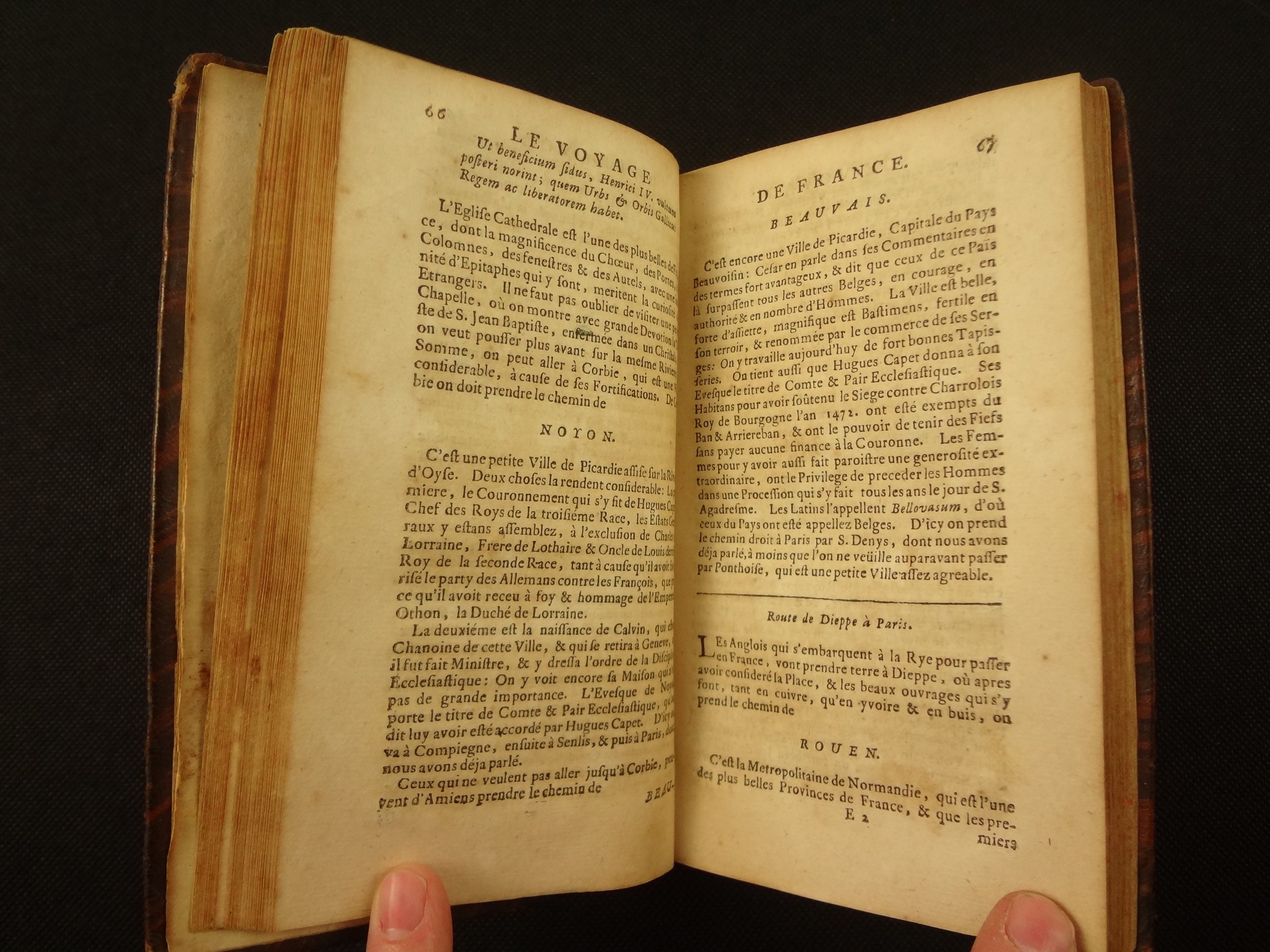 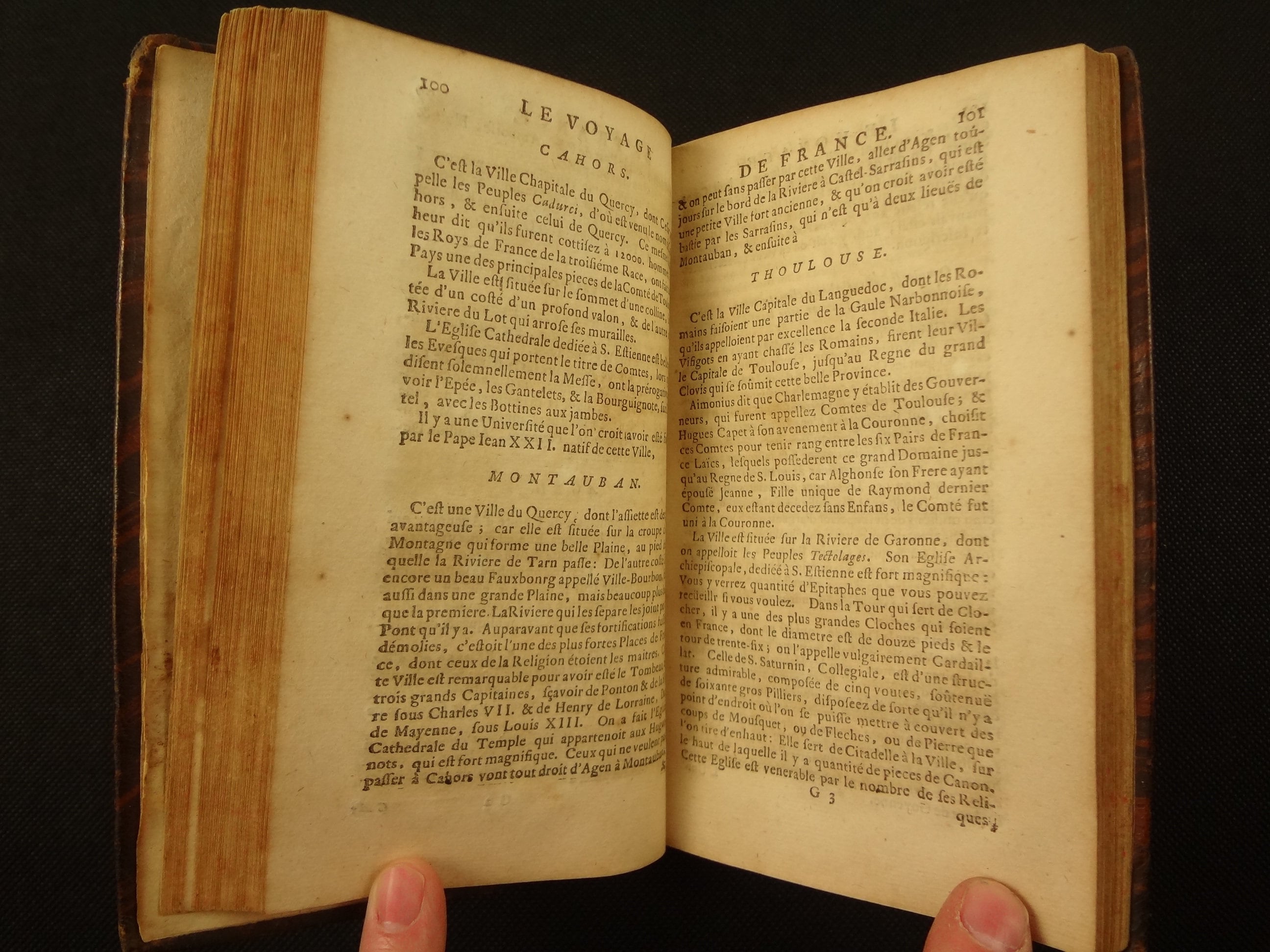 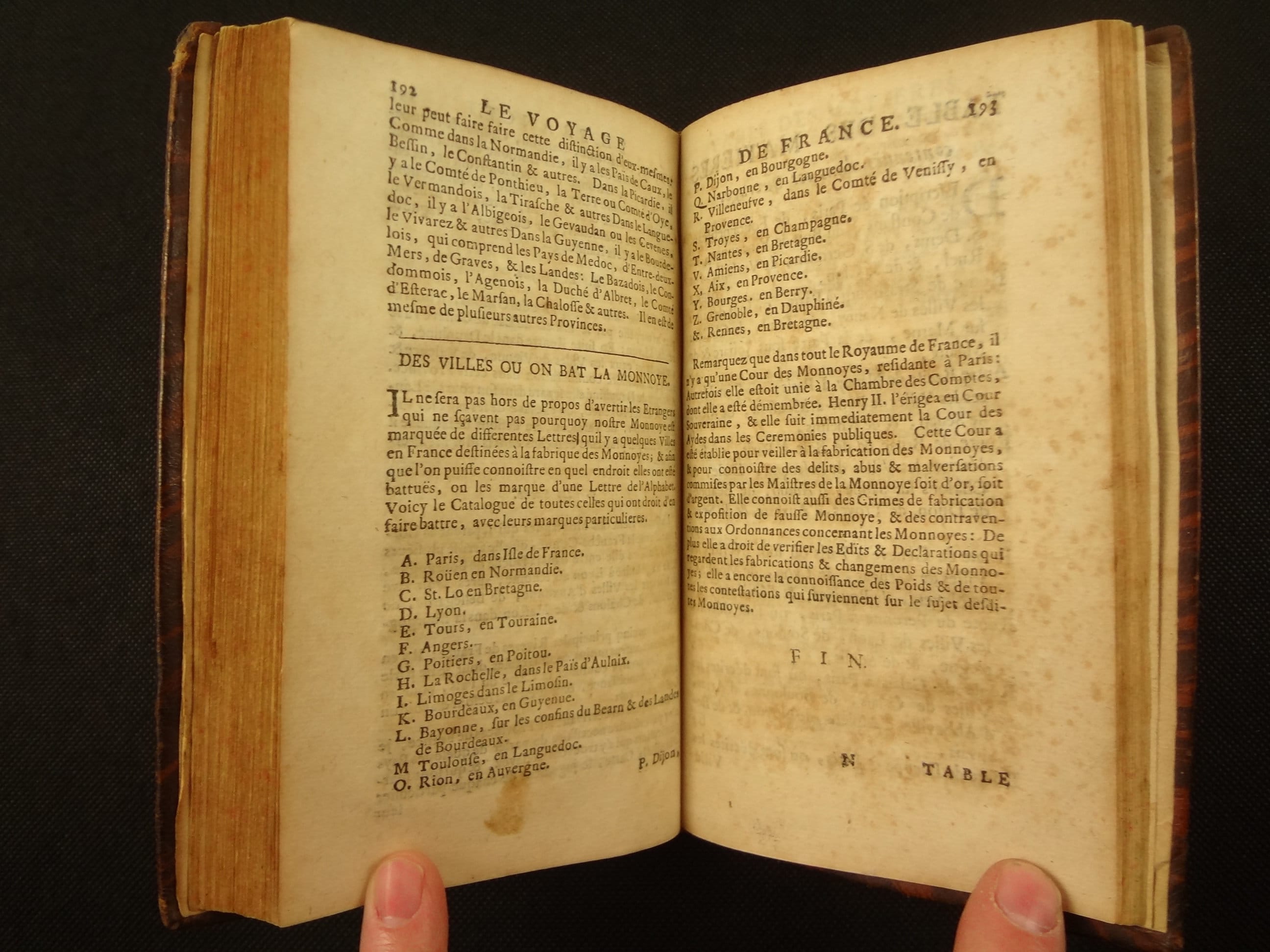 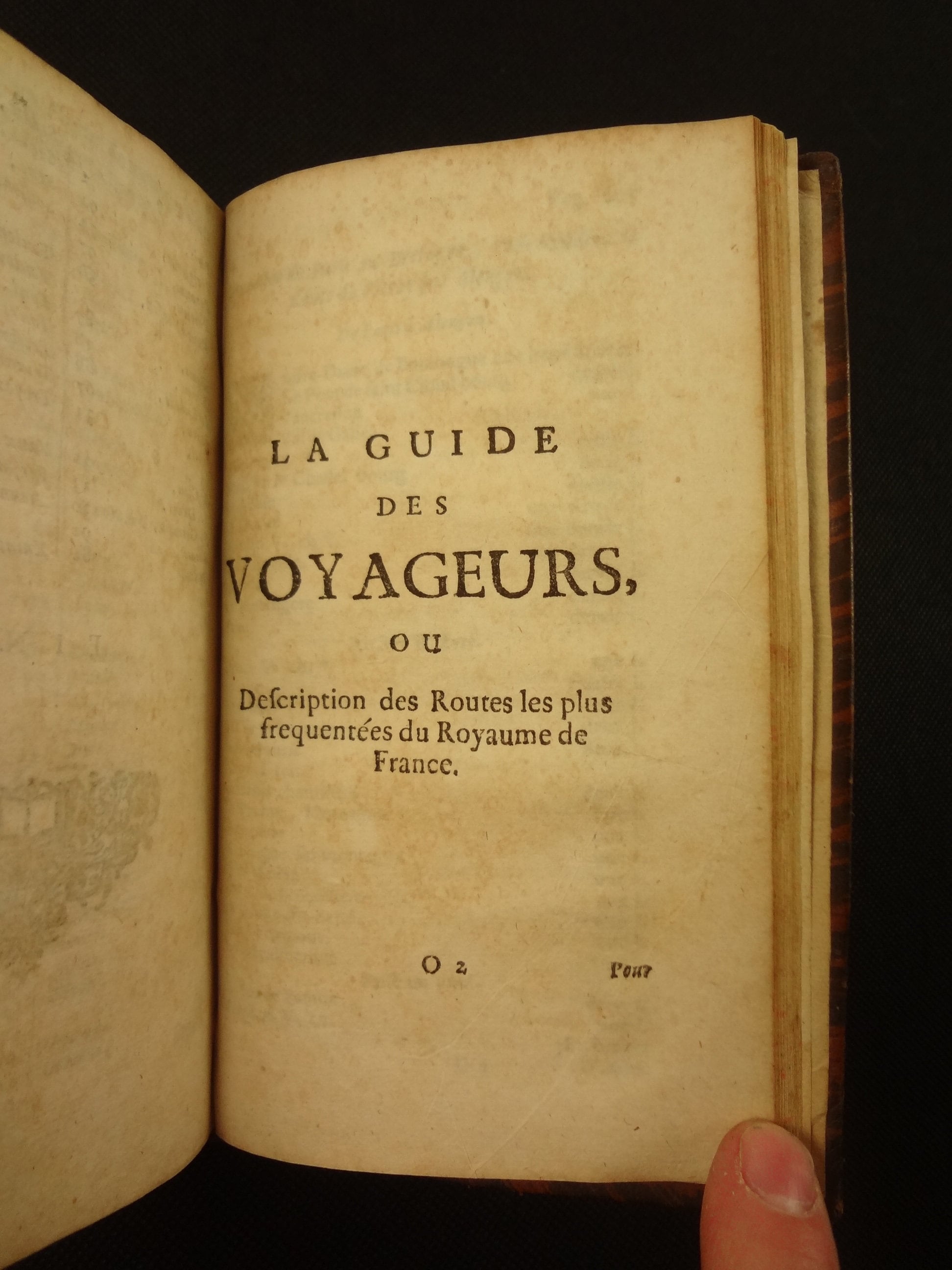 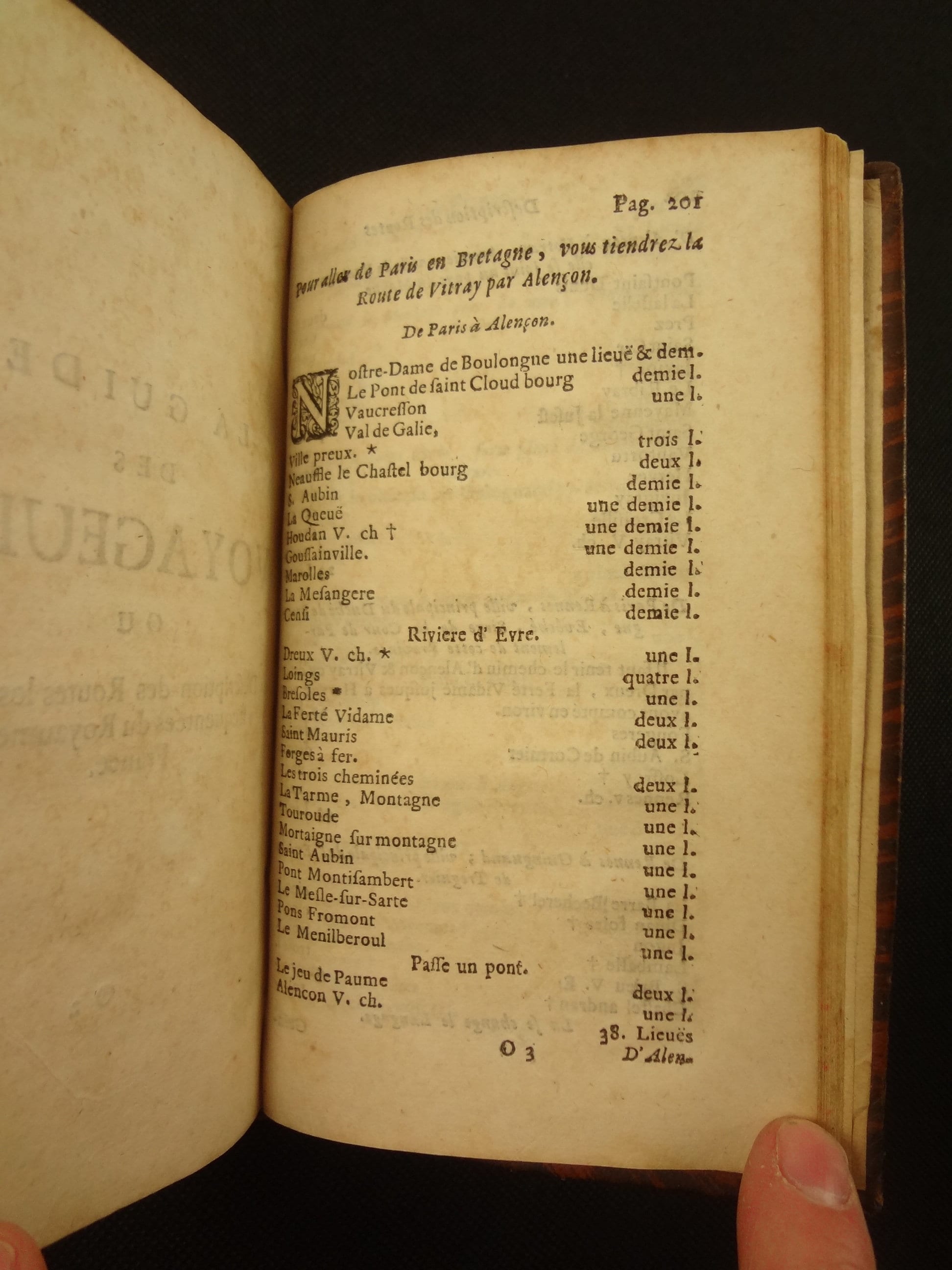 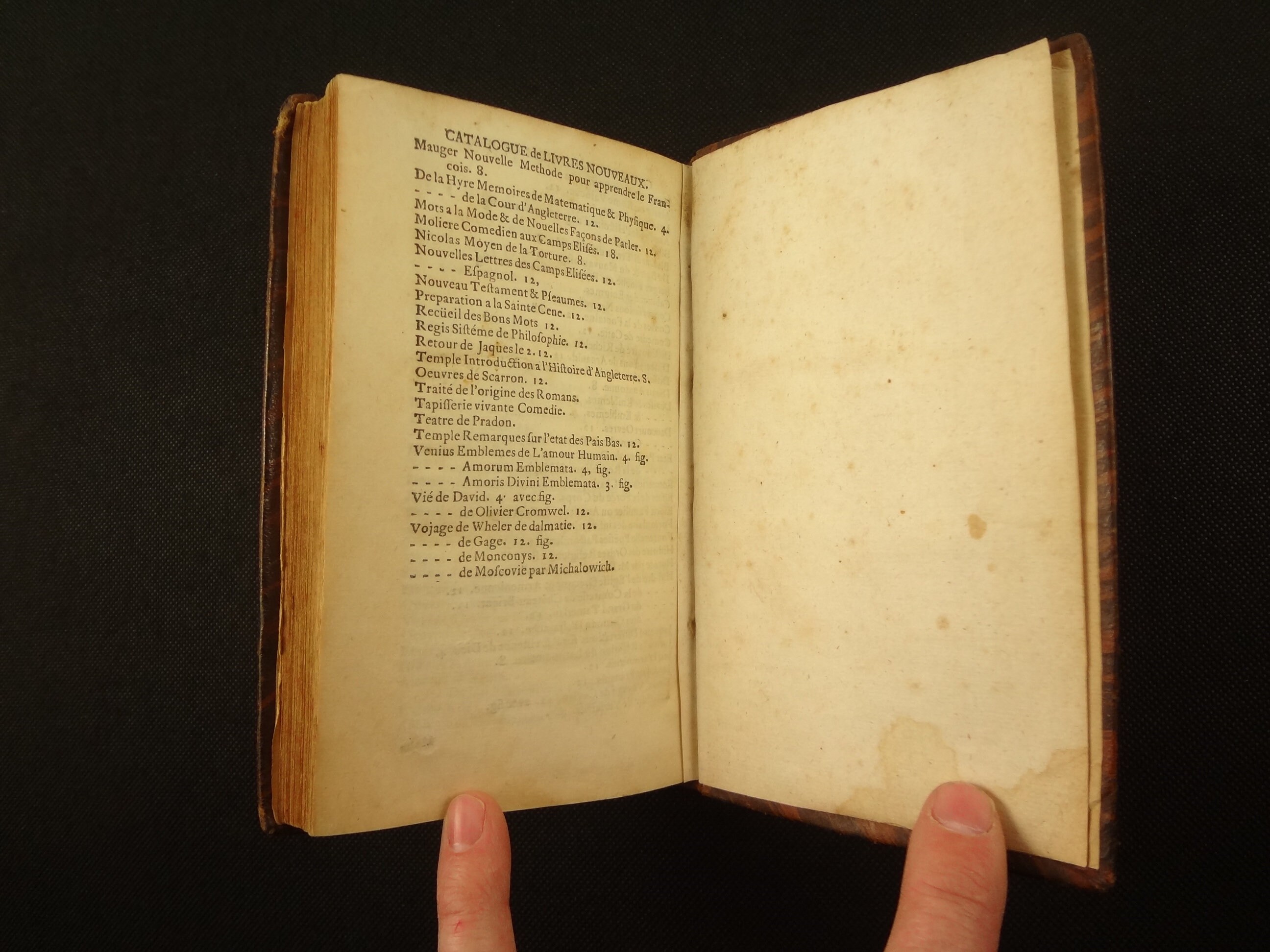 An early (1699 printing) grand tour travel guide to France, scarce. First published in 1672, as Le Guide Fidelle des Estrangers Dans le Voyage de France, by S. Maurice, here it's reprinted almost word-for-word, but accredited to a "Baron G.D.N". This work is notable for several reasons; it is an early grand tour travel guide (the tradition of grand tours developed in the 17th century) and it's curious that it's attributed to a different author in 1699.

This is a scarce work; at the time of this listing two are listed for over $1,000 USD using Vialibri, and I find no copies of the 1672 edition available for purchase. The two listings claim that this is the only edition of this work (but it's not), and list only two copies on OCLC with one OCLC number (but I find that there are several OCLC numbers for this work, and there are actually a handful in the world's libraries).

In Britain, Thomas Coryat's travel book Coryat's Crudities (1611), published during the Twelve Years' Truce, was an early influence on the Grand Tour but it was the far more extensive tour through Italy as far as Naples undertaken by the 'Collector' Earl of Arundel, with his wife and children in 1613–14 that established the most significant precedent.

Larger numbers of tourists began their tours after the Peace of Münster in 1648. According to the Oxford English Dictionary, the first recorded use of the term (perhaps its introduction to English) was by Richard Lassels (c. 1603–1668), an expatriate Roman Catholic priest, in his book The Voyage of Italy, which was published posthumously in Paris in 1670 and then in London.

The idea of travelling for the sake of curiosity and learning was a developing idea in the 17th century. With John Locke's Essay Concerning Human Understanding (1690), it was argued, and widely accepted, that knowledge comes entirely from the external senses, that what one knows comes from the physical stimuli to which one has been exposed. Thus, one could "use up" the environment, taking from it all it offers, requiring a change of place. Travel, therefore, was necessary for one to develop the mind and expand knowledge of the world.

This works 1699 dating, with a 1st edition printed in 1672, places it historically at the nascent of the grand tour tradition.

I cannot recall a work with more vague authorship. While the 1672 printing is attributed to a Robert Alcide de Bonnecase de Saint-Maurice, I can find no bibliographic information for this individual other than authorship attribution; he is attributed as an author to a handful of works focused on travel and France in the late 17th century. In 1885, Albert Babeau (in Les Voyageurs en France, p.93) accused the publisher of this edition, Vander, of stealing the work and adding only slightly to it; but I would question, is it possible that this "Bonnecase" was a pseudonym of a "Baron G.D.N."? "Baron G.D.N." seems purposefully vague, and again no specific information regarding true-identity can be found. Due to the political instability of the 17th century, authors avoiding using their real names was not uncommon.

See pictures. Some wear to binding at edge and corners. 2" crack at top of front joint, 1 cm loss at bottom of front joint. Chip at top of spine. Top rear corner of board bumped. Turn-ins have ghosted pastedown, likely from oiling. Ex-libris ticket "Guy." on pastedown. Scribbled out name on flyleaf, "... delaverne". Toned throughout. Some foxing, brought on by thumbing as more at fore-edge in common thumb location. Some thumbing/soiling. Initials at top of title page. Moisture mark at bottom corner of rear flyleaf, may have been caused by oiling of binding.