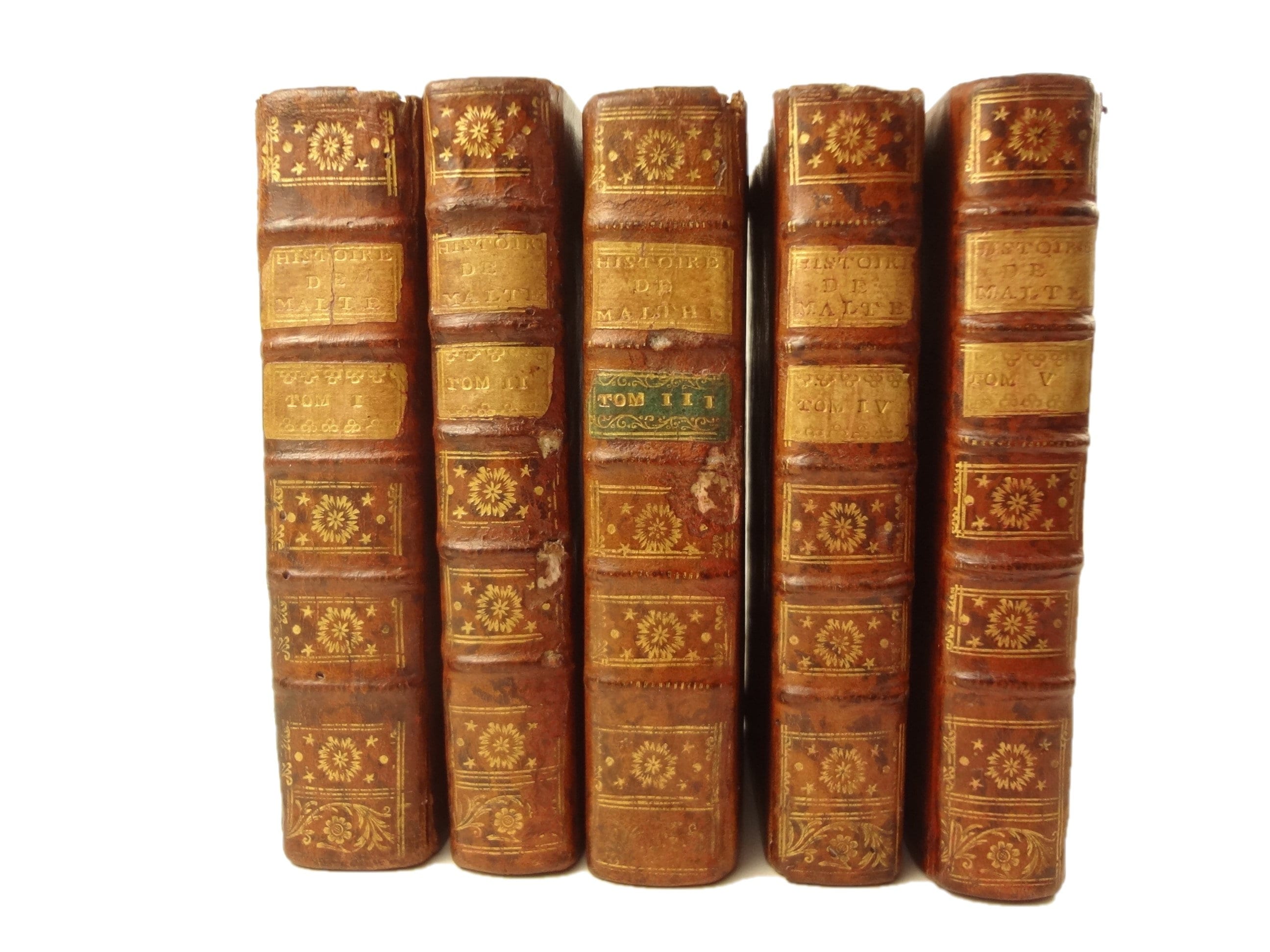 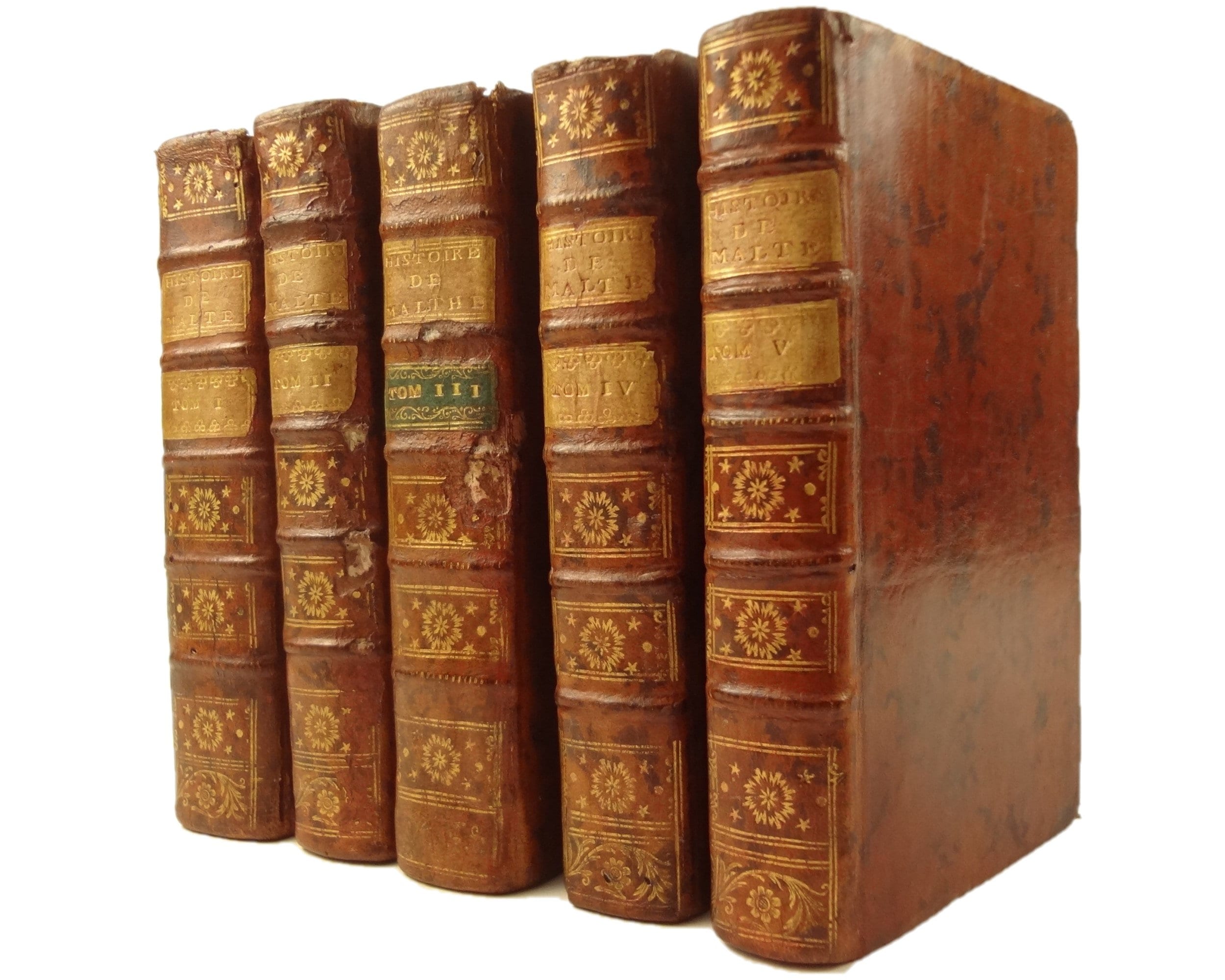 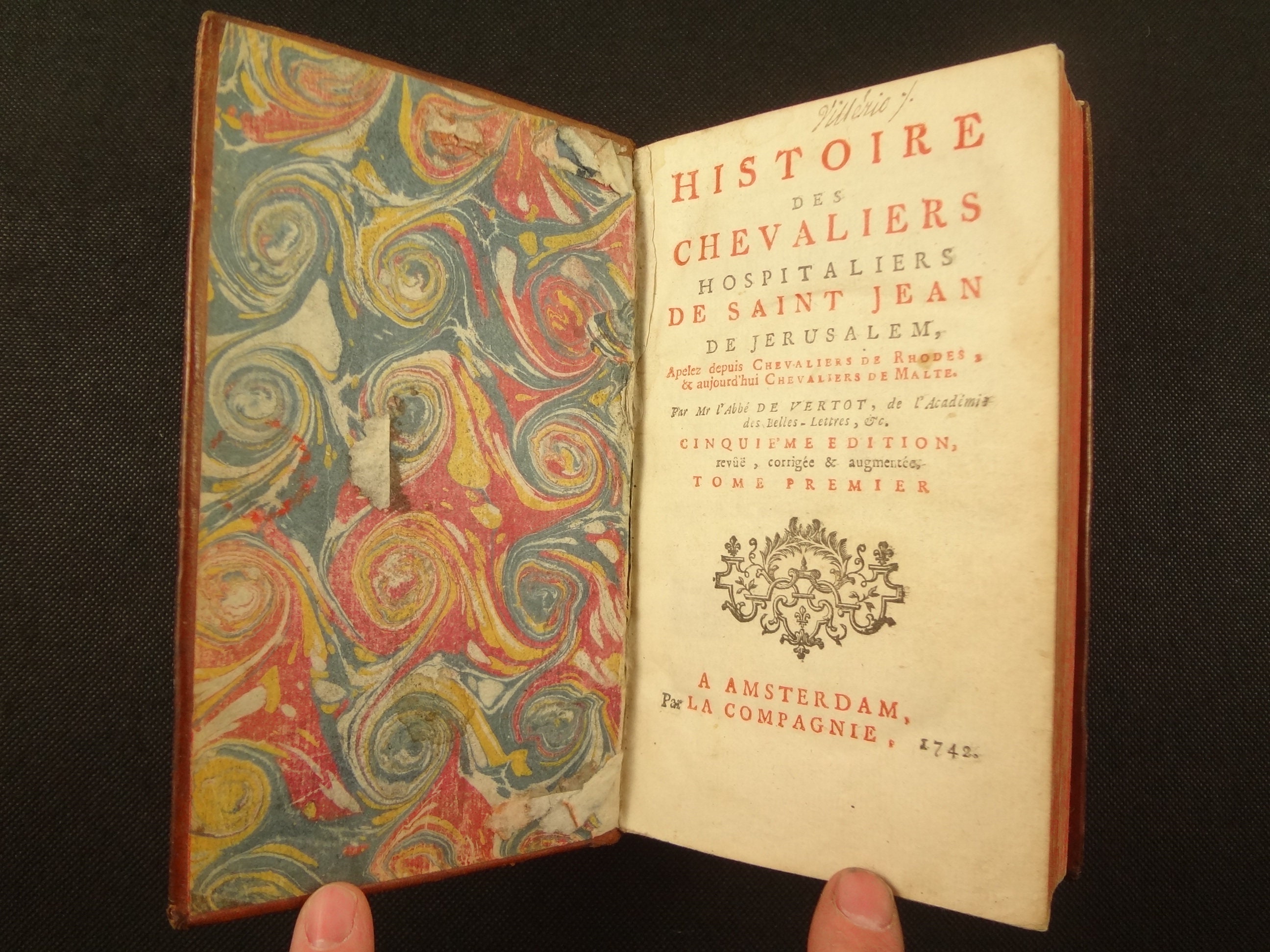 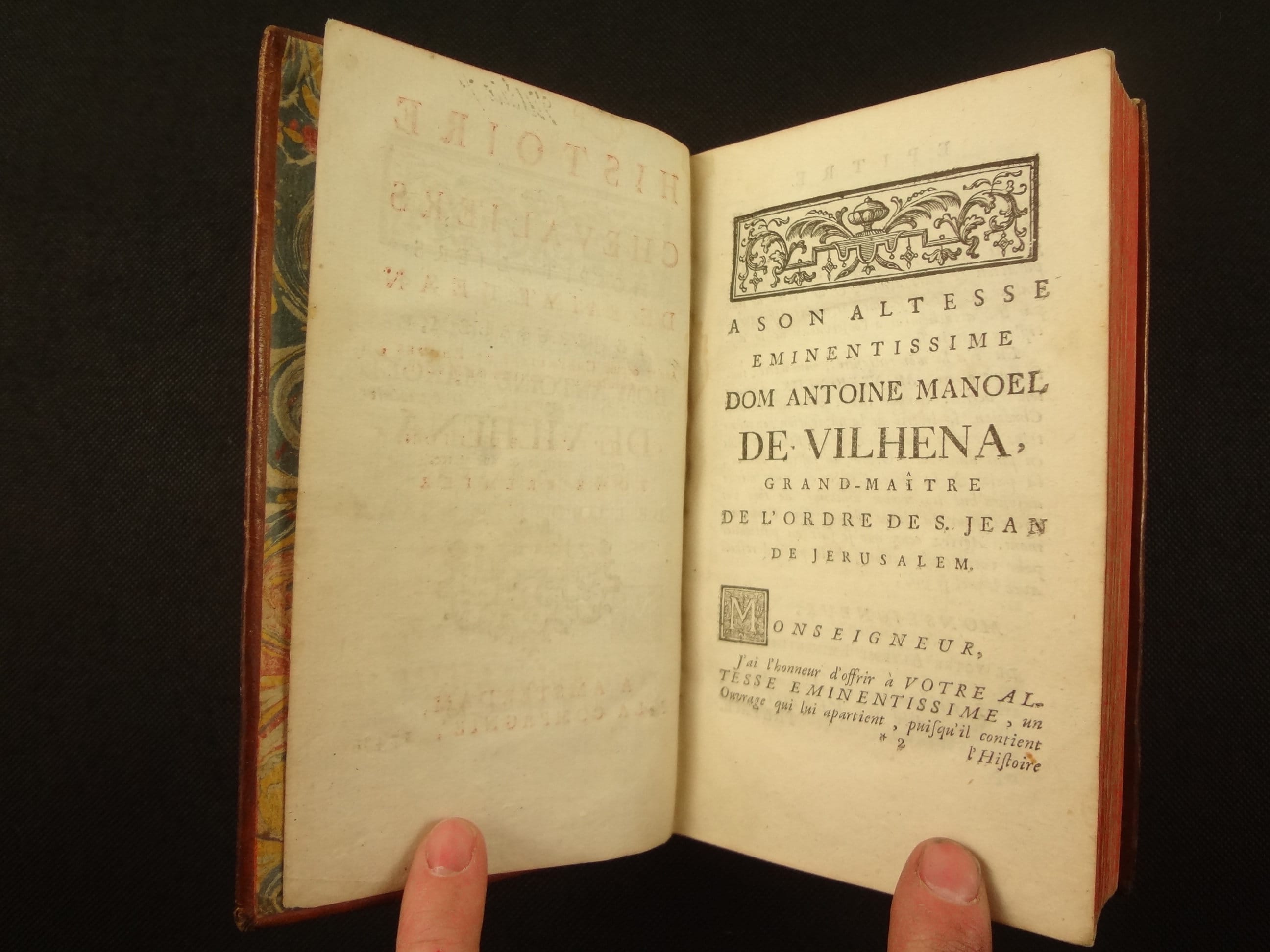 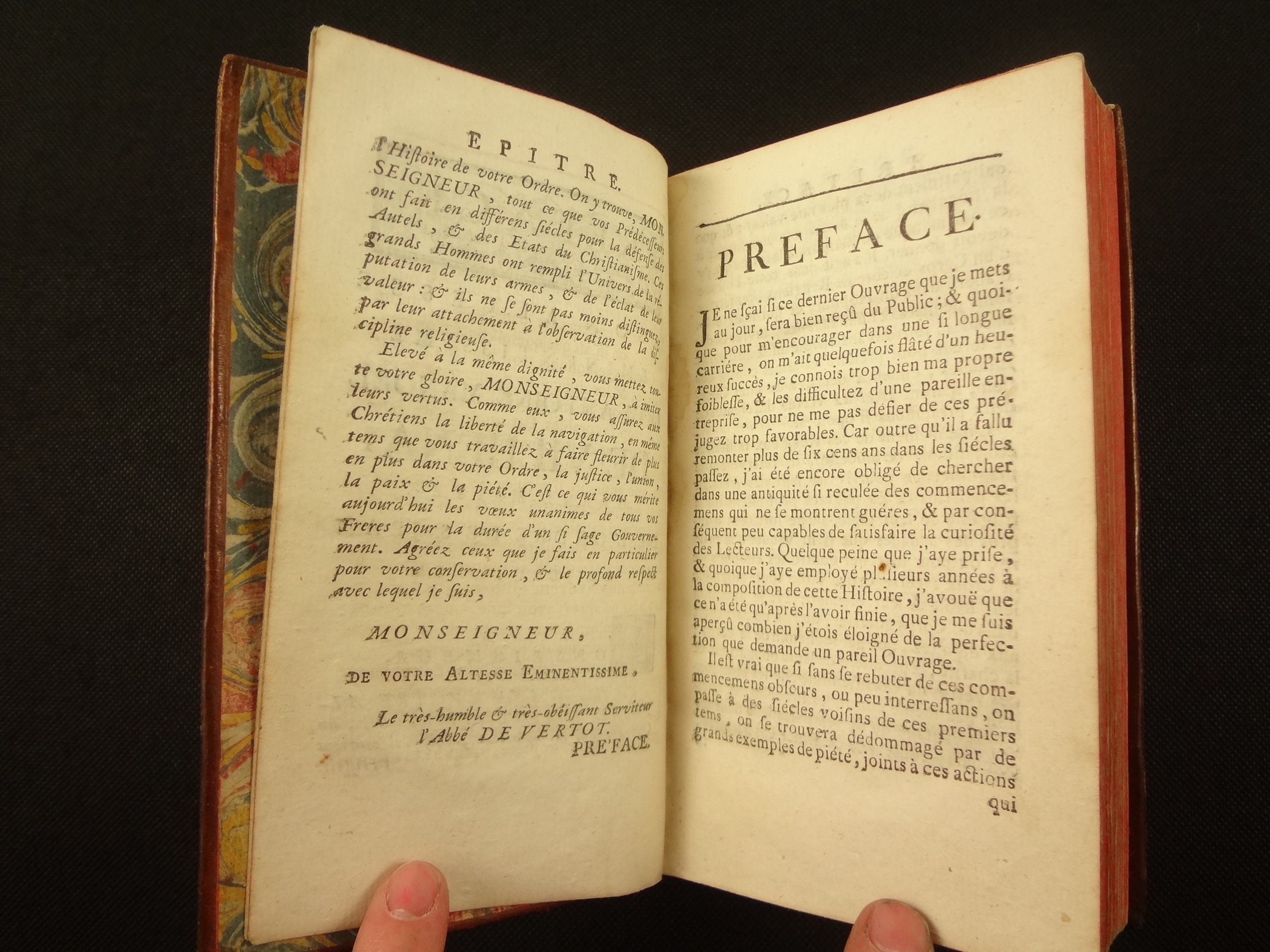 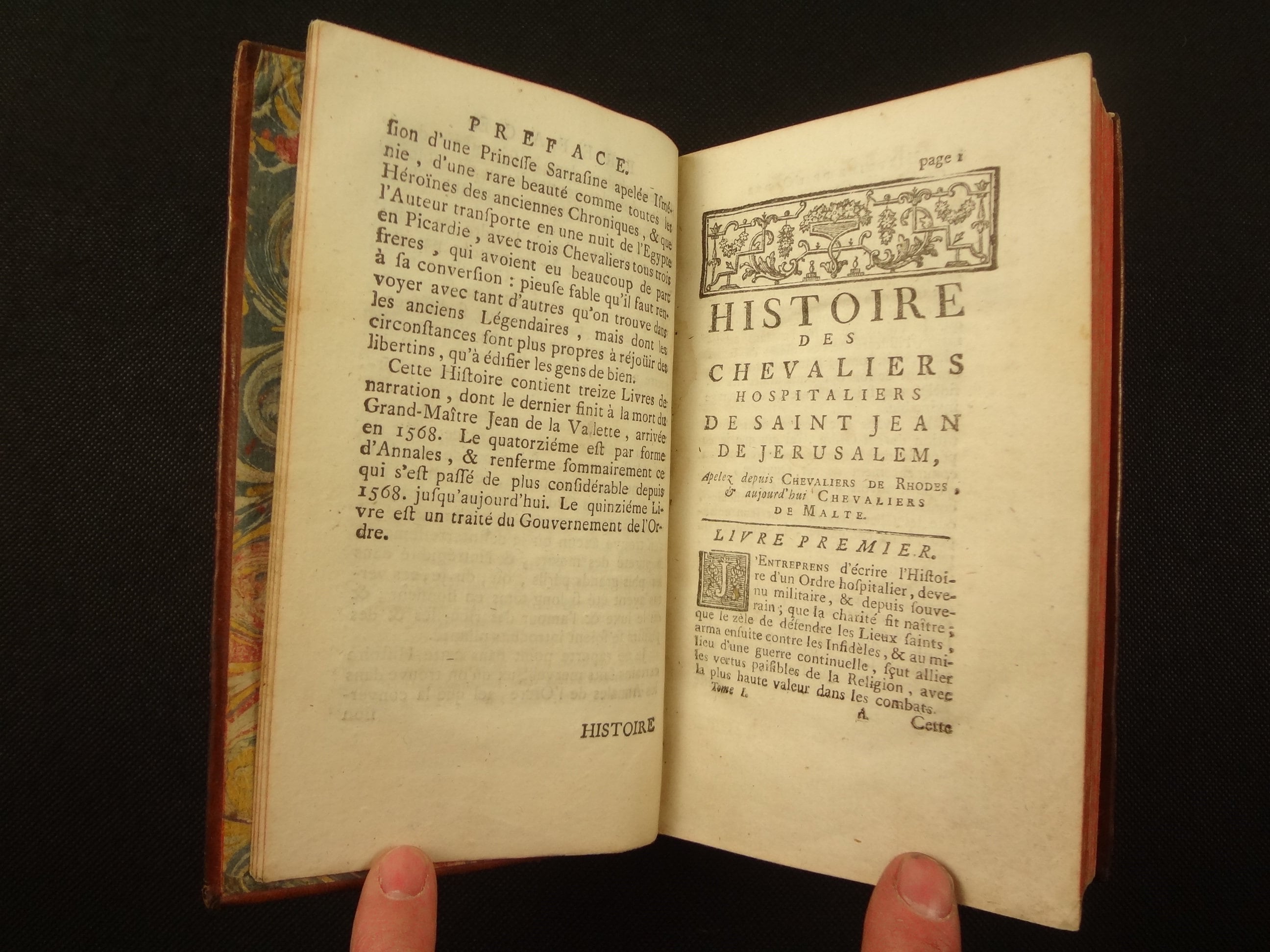 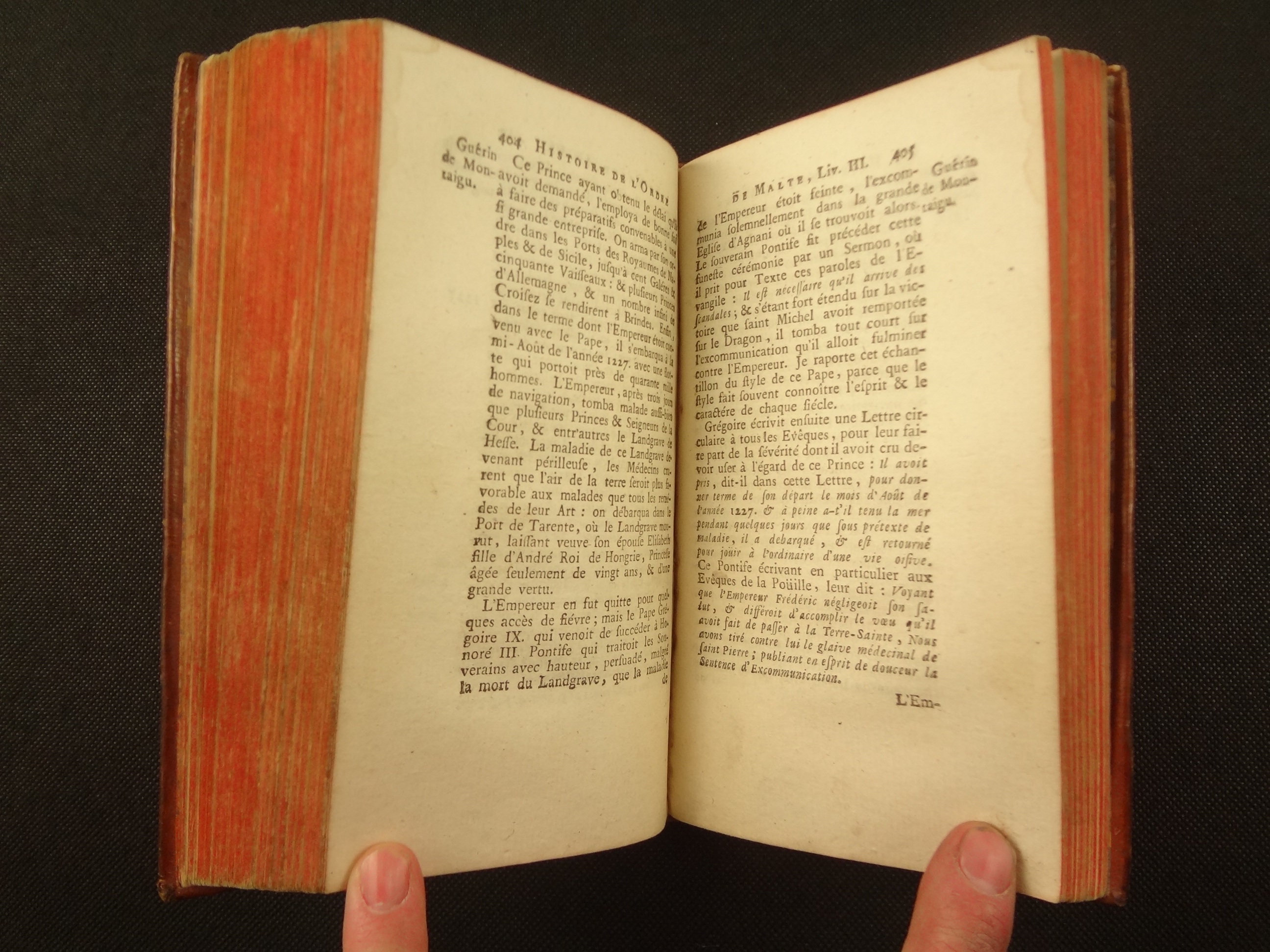 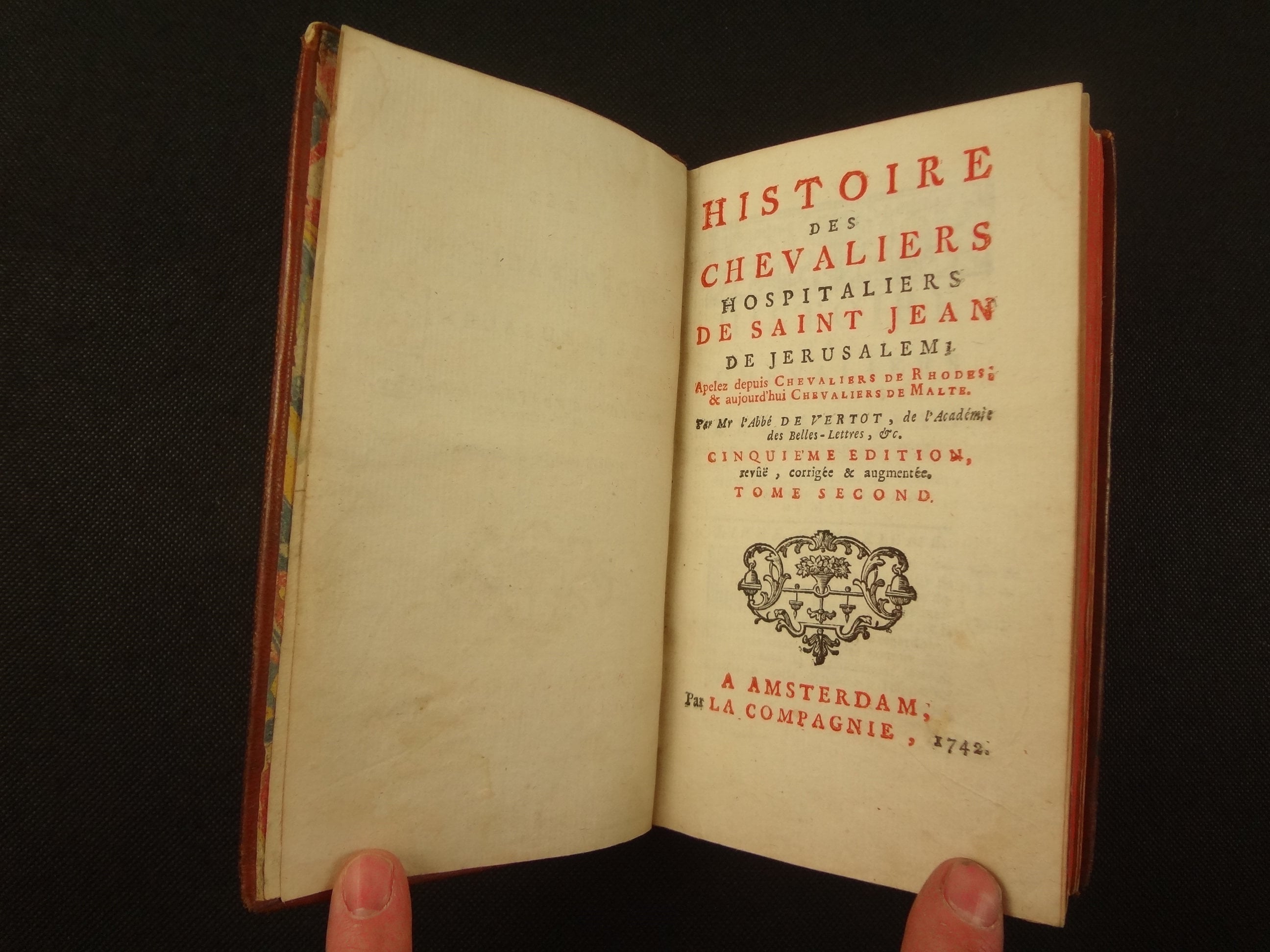 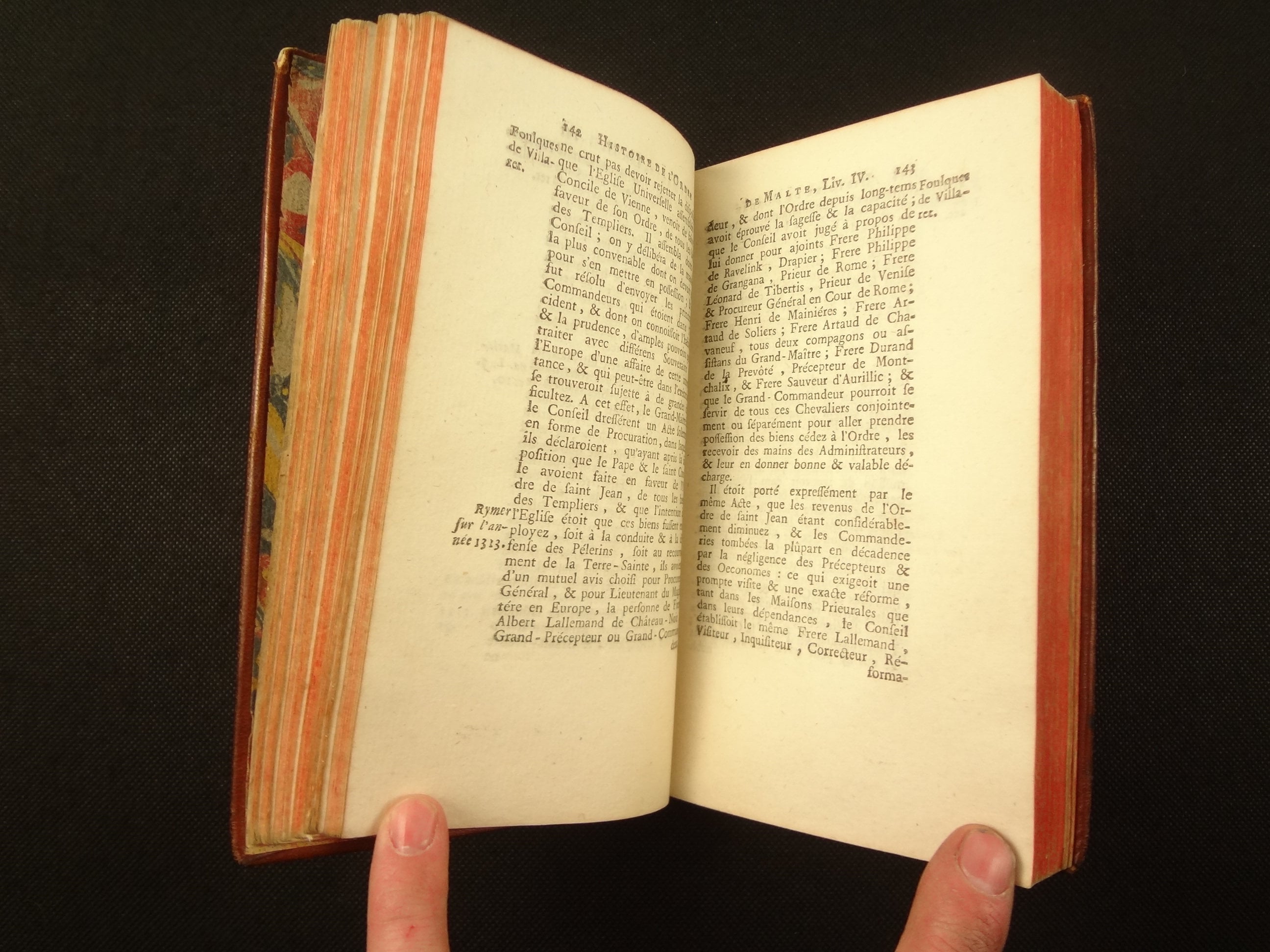 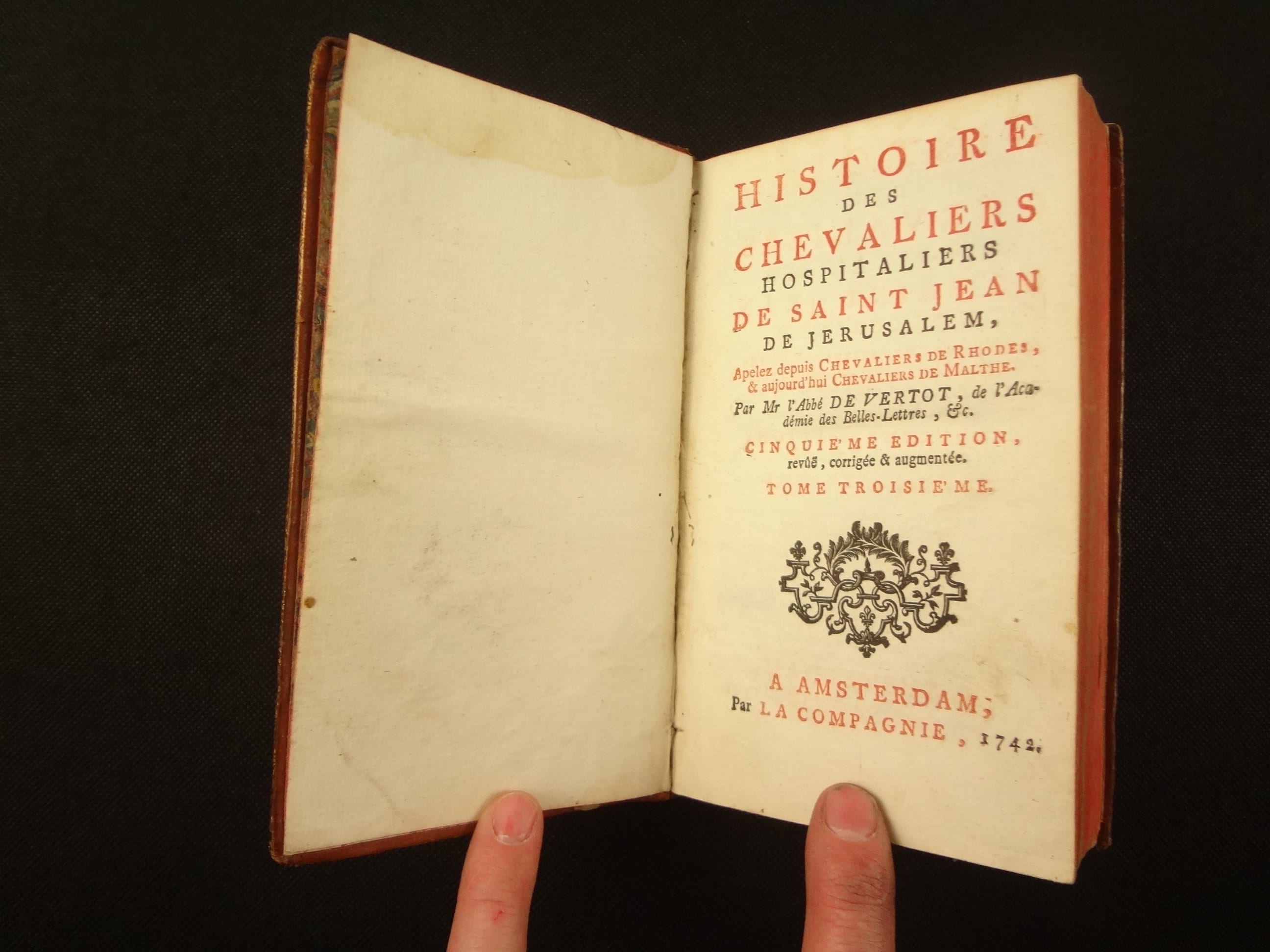 An attractive five-volume history of the Knights of Malta, Knights Hospitaller or Order of Knights of the Hospital of Saint John of Jerusalem by Abbe de Vertot. This is the augmented fifth edition.

The Knights of Malta, or the Order of Saint John, was a medieval and early modern Catholic military order. It was headquartered in the Kingdom of Jerusalem until 1291, on the island of Rhodes from 1310 until 1522, in Malta from 1530 until 1798 and at Saint Petersburg from 1799 until 1801.

The Hospitallers arose in the early 12th century, during the time of the Cluniac movement (a Benedictine Reform movement), as a group of individuals associated with an Amalfitan hospital in the Muristan district of Jerusalem, dedicated to John the Baptist and founded around 1099 by Gerard Thom to provide care for sick, poor or injured pilgrims coming to the Holy Land.

After the conquest of Jerusalem in 1099 during the First Crusade, the organisation became a military religious order under its own papal charter, charged with the care and defence of the Holy Land. Following the conquest of the Holy Land by Islamic forces, the knights operated from Rhodes, over which they were sovereign, and later from Malta, where they administered a vassal state under the Spanish viceroy of Sicily. The Hospitallers were one of the smallest groups to briefly colonise parts of the Americas: they acquired four Caribbean islands in the mid-17th century, which they turned over to France in the 1660s.

The knights became divided during the Protestant Reformation, when commanderies of the order in northern Germany and the Netherlands became Protestant and largely separated from the Roman Catholic main stem, remaining separate to this day, although ecumenical relations between the descendant chivalric orders are amicable. The order was suppressed in England, Denmark, as well as in some other parts of northern Europe, and it was further damaged by Napoleon's capture of Malta in 1798, following which it became dispersed throughout Europe.

See pictures. A handsome set, but still with a little wear. Bindings have some edge and corner wear, with an occasional rub. Spines have a few small chips. Labels seem to have fallen off spines. There are a few worm holes in the spines, and two volumes have small chips out of the spines (see pictures). Joint on v1 front is starting, but just and it is the only one. Endpapers excised from v1; starts at title page. Margins are wide. A little toning toward edges. Occasional fox spot, thumb and dog-ear. Moisture mark near top of page at rear of v2. Ex libris plates removed, with some remnants on pastedowns.